I haven’t tried to review much in this blog, except for an episode of THE OFFICE. Of course, as you may have noticed in my post about my first PHILADELPHIA UNION Soccer Game  https://adrianhickman.wordpress.com/2011/05/03/super-dooper-say-beeembo/ , I prefer to talk about how I felt and what I see, not just recap a show.

So, in this non-review of FALLING SKIES, the new TNT Sci-Fi Thriller from Executive Producer Steven Spielberg, you won’t get chronological recounting, nor so many facts and figures. What you will get is why I liked the show, what I thought about while watching it, and hopefully excite you enough to watch without spoiling big surprises. 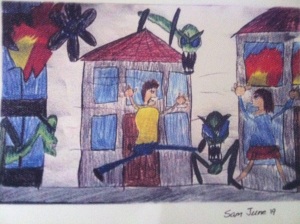 The picture above is part of how they handle the backstory which is approximately 6 months in real time yet a world apart from how the area looked before those 6 months. It is drawn by Sam, youngest son of Tom Mason (Noah Wyle) , who in a now long time ago was a History Professor. He has three sons, the middle one having been abducted by the aliens. Abductees are “harnessed” to an attachment to their spine that puts them under alien control. For now, the aliens only seem to be interested in the young.

Tom has also lost his wife in the initial invasion, which is what Sam’s drawing represents both what has happened and what Ben has to sort out.

Tom and the family are now involved in the 2ndMass, which is a resistance group. The type of name for their band of brothers is chosen because it allows you to see this battle as a mirror image of other battles for American soil. The battle against the aliens is essentially the Revolution, but twists allow it to come into the Civil War realm.

The aliens do show up early, effectively, and sparingly. That is what I like a lot about this. You have plenty of unanswered questions, but you also know that, as of now, there are two types of aliens: MECHS, essentially armored walkers, and SKITTERS, low to the ground spider like fighters.

Unlike so many other sci-fi series, you do not get a sense of despair from “How can we ever beat them?” It is mentioned early on that the aliens die, just like us, but that you need to be close to kill them. That closeness allows for some dramatic face to face encounters.

You see a war room that is not unlike a war room in Dr. Strangelove,  Fail Safe, or Seven Days In May, except for the lack of technological sophistication. There are leaders and there are nay-sayers. The movement is young enough that raw emotion can still guide some decisions.

The setting for last night is Boston, allowing for direct connection to the Revolutionary War, right down to quoting the JOIN OR DIE battle cry. History repeats itself, but it does it in sync with current times. Other loose connections are drawn to the Revolution, and later to the Civil War.

There are confrontations with the aliens, including one where a SKITTER is killed and you watch a vaguely human-type death scene. There are other encounters with MECHS, and very few with the flying machines above. The home base for the aliens looks like a giant oil rig sitting adopt the now destroyed city.

As with any tale of resistance, the need to survive is a primary goal. Yes, you have to kill the aliens, but you also have to eat. While they may have raided munitions and depots in the Civil War, they now raid big box stores and supermarkets, all to support not only the troops but the protected civilians.

And as with every civil war, you get brother against brother as the small band lead by Tom on a mission fall into the clutches of a band of mercenaries, who have managed to find treasure in this destruction. Of course, the mercenaries are drawn a bit more broadly and high energy, to allow for triggered conflict among humans.

The best part of this show is that this is a human form of sci-fi. The Executive Producing hand of Spielberg can be felt in the pacing, the musical score, the character relationships, and the fact that last nights episode was not all blowing up stuff. The action scenes were very well executed and look great in HD, but the show so far concerns itself with the human element, the need to find normal among the chaos. That is why I loved it. Too many alien sci-fi shows are all about special effects, clichéd battle cries, and the shock factor of seeing gruesome aliens.

FALLING SKIES is about the human spirit trying to right itself.

A couple of little scenes really made me smile because they showed respect to the genre and also rang true. In the first scene, as Tom is getting ready to move out of the area to a new sector, he stops by a destroyed book store. He picks up two books: 20,000 LEAGUES UNDER THE SEA by Jules Verne, and A TALE OF TWO CITIES by Charles Dickens.

I smiled when I saw this because I flashed back to one of my favorite Sci-Fi films THE TIME MACHINE (1960). In the closing scene, after HG Wells has gone ahead in time again, his friend FILBY notices three books missing from Wells library, and posits the question “What three books would YOU take?”. A great way to end the movie on a thinking note.

As Tom looked at the books, I felt that he was making a similar choice, though you do learn that he chooses Dickens. It is definitely the best of times and the worst of times, and lessons and parallels may exist that help the resistance.

Later, in the abandoned school classroom, as they have dealt with the mercenaries, a poster of the CIVIL WAR is in the background, again bringing their plight full circle.

So you have an exciting sci-fi story that exists best when the human element is in the forefront. Not many of the human scenes feel cloying or manipulative, and the fact that it has been established that the aliens may be impossible but not invincible, it really lends the show the aura of hope for a new life, and not just survival.

One final note: I am experimenting with the social media initiative that TNT, Klout, and the producers have built around the show. They have set up a website called FALLING SKIES: AN ARMY OF INFLUENCE. Essentially an effort to establish a trending hashtag, allow for fans to “join the resistance” and hopefully get their friends to watch, as well. It is essentially a light version of an RPG.

On the website are info, bios, games, and video highlights. The most important part is the ARMY OF INFLUENCE Leaderboard, which tallies Tweets made by registered fans that use the hashtag #fsincentivized . There will be a walk-on role available to the most effective member on Twitter.

In addition, the Influence members receive packages delivered at home that contain resistance gear, maps, and weekly communiqués like a copy of Sam’s drawing. This swag allows for a bit more immersion as well as some real world visibility.

This social media effort looks really effective, and I hope to not only enjoy the “battle” but also learn from it, in case I find myself working again.

In the end, I am hooked and stand ready to follow the 2ndMass. Join Or Die! 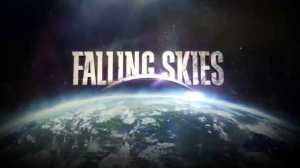